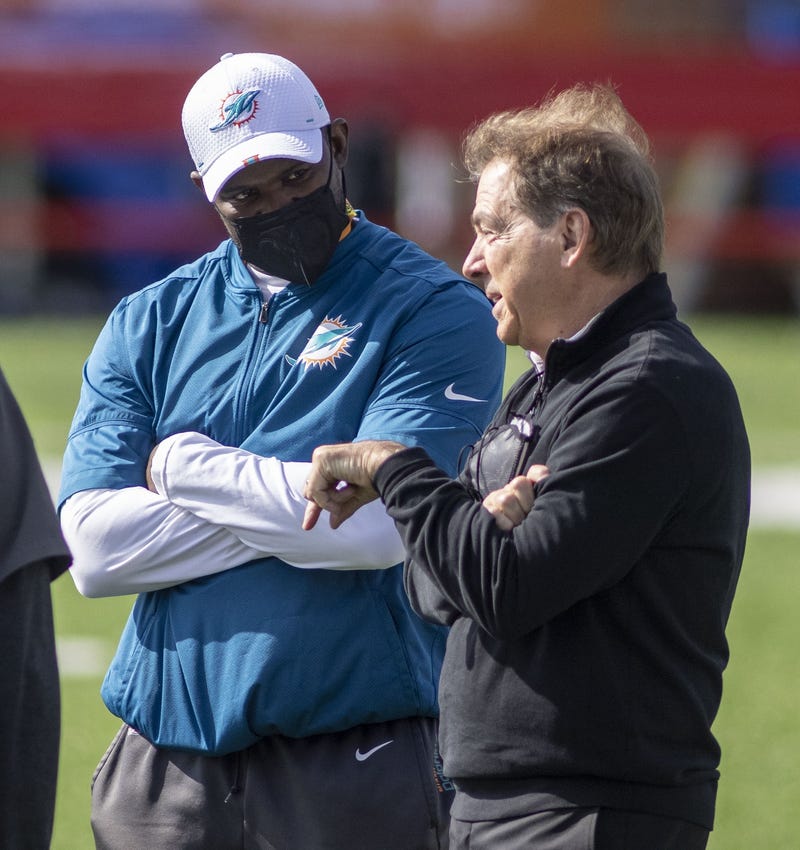 Looking to Build around Tua: Head coach Brian Flores and his staff got lucky when they were announced as one of the coaching staffs for this year’s Senior Bowl. With a first-hand look at a number of outstanding prospects, the Dolphins can begin to build their offense around starting quarterback Tua Tagovailoa.

Tagovailoa took over after the bye week last season and, while he struggled some, Flores and his staff have stated that the former No. 1 draft pick is their starter as they head into the offseason and into 2021. Both Flores as well as Dolphins General Manager Chris Grier have come out in full support of their rookie quarterback.

Miami holds the No. 3 pick in this year’s draft courtesy of a trade with the Houston Texans. It is unclear whether the Dolphins have thought about trading the pick. One very intriguing idea that is being talked about is of getting Heisman Trophy winning wide receiver DeVonta Smith. Another potential pick, would be if the Dolphins were to take University of Oregon offensive lineman Penei Sewell at No. 3. What would remain to be seen is if he would play at LT and the Dolphins can make Austin Jackson a RT.

With Jacksonville and the New York Jets set to draft quarterbacks at picks No. 1 and No. 2, the Dolphins could grab Smith and reunite him with his former Alabama teammate, Tagovailoa. Smith is at the Senior Bowl but will not play due to a dislocated finger suffered in the Crimson Tide’s national championship win over Ohio State. Smith caught 12 passes for 215 yards and three touchdowns in that game. He would fill a big need – deep-threat, speed receiver – for Miami. One tidbit, Sewell and Tua Tagovailoa were selected as co-recipients of the 2019 Polynesian College Football Player of the Year Award. The award is presented annually to the most outstanding Polynesian college football player that epitomizes great ability and integrity.

During the 2021 Reese’s Senior Bowl practices, the Miami Dolphins saw several assistant coaches taking center stage on ESPNU’s broadcast of the event. Many were very impressed with how they conducted themselves on the football field. Dolphins General Manager Chris Grier and Alabama Coach Nick Saban were seen speaking together. Later on they continued their conversation with Dolphins coach Brian Flores. One thing that was evident, Alabama RB Najee Harris and Alabama WR DeVonta Smith got alot of facetime with Dolphins coaches.

Flores and the Miami brass will likely focus on building a solid offensive unit beginning with a wide receiver and then working on the offensive line. The Dolphins have the draft capital to do so in 2021 with four picks in the top-50. Miami holds picks No. 3, 18, 35, and 50. There also exists the potential for additional picks were the Dolphins to trade down from the No. 3 spot in the first round.

There is also some speculation that Miami would not pass up an edge rusher if available. The Dolphins accumulated 41 sacks this season. Defensive end Emmanuel Ogbah led the team with nine and the only other players with more than four were linebackers. Flores and his defensive staff need to generate more pressure on opposing quarterbacks with their defensive line. That might mean the Dolphins would not pass on Miami’s Greg Rousseau (6-5, 260) if he was available at No. 18. The same could be said for Wake Forest DE Carlos Basham (6-5, 285) if he was available at No. 35.

Regardless, the goal is to build the offense around Tagovailoa in an effort to take the next step – make the playoffs.

2 thoughts on “Dolphins #1 Focus to Build Around Tua is Promising!”