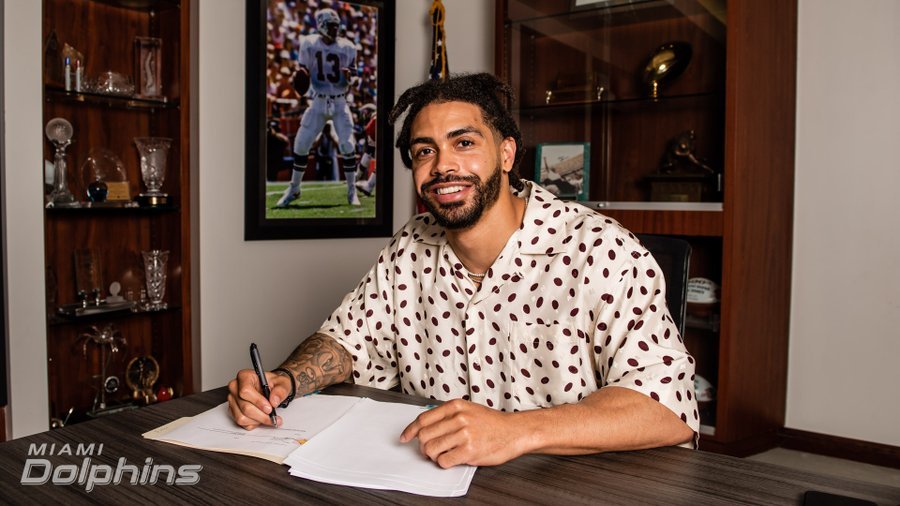 The Miami Dolphins were not a quick-strike, high-powered offense in 2020. That should definitely change some in 2021. The Dolphins signed WR Will Fuller V as an unrestricted free agent. Naturally, all the speculation is on how Will Fuller will bring out the best of Tua. Fuller played his first five NFL seasons in Houston and enjoyed his best professional season in 2020. The former first-round draft pick caught 53 passes for 879 yards and eight touchdowns.

All those numbers were career highs for Fuller. The yardage and touchdown numbers would have been No. 1 on Miami’s receiving list last season…and Fuller played in just 11 games due to a suspension.

What Fuller brings to Miami – and to young quarterback Tua Tagovailoa – is a true vertical threat receiver who can score any time he touches the ball. When Fuller was coming into the league out of Notre Dame, he ran a 4.32 40-yard dash at the 2016 NFL Combine.

Tagovailoa is used to speedy receivers. He played with quite a few at Alabama and could use a few in Miami. The Dolphins could still opt for another game-breaking receiver with one of two first-round draft picks – No. 6 and No. 18 – they own in 2021.

Alabama receivers DeVonta Smith, the Heisman Trophy winner, and Jaylen Waddle as well as LSU’s JaMarr Chase all fit the bill. Florida tight end Kyle Pitts is another option, though the Dolphins already have a 6-foot-6 pass-catching tight end in Mike Gesicki. Gesicki led the Dolphins with six touchdown catches in 2020.

Where Fuller will really bring out the best in Miami and Tagovailoa is in his ability to separate from defenders. According to NFL Next Gen Stats, Fuller averaged three yards of separation last season. That would have been the highest among Dolphins starters last year though backup and return specialist Jakeem Grant did average 3.1.

Miami’s top three receivers last year – DeVante Parker, Gesicki, and Preston Williams all averaged 2.2 yards of separation or fewer. All three ranked in the bottom 10 of qualified wide receivers in 2020.

Fuller’s speed should open up the offense a bit for Miami. His ability to run the ball on jet sweeps and his knack for turning quick game passes into big plays should provide just the boost that Miami and Tagovailoa need to take the Dolphins to their next step – a run through the AFC playoffs.