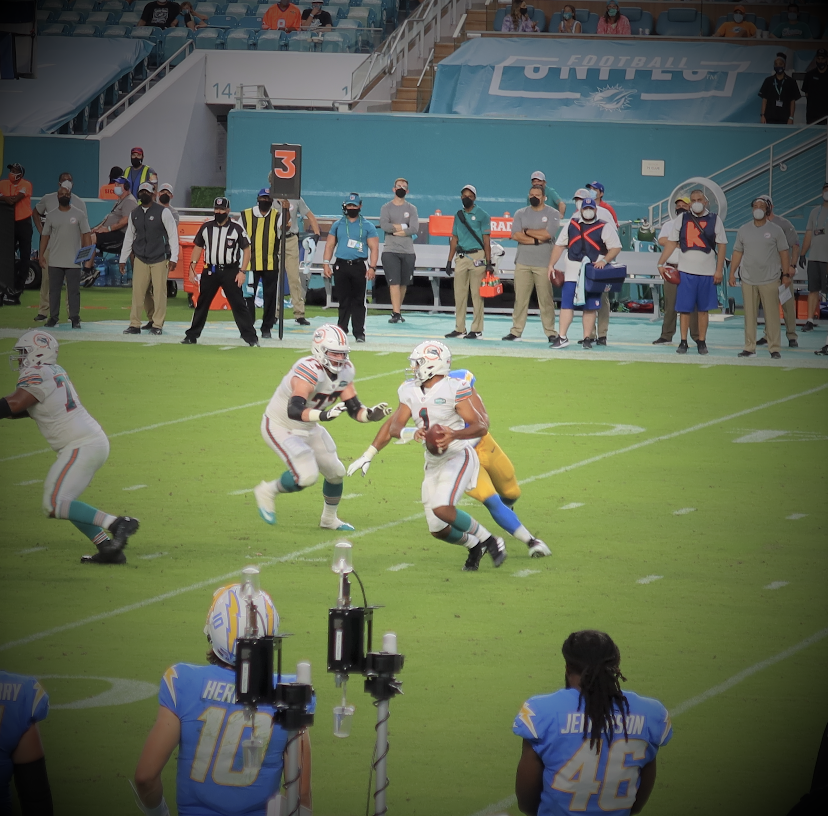 It was pegged to be a matchup between rookie quarterbacks. Justin Herbert of the Chargers and Miami’s Tua Tagovailoa were going to go at it in Week 10. It wasn’t quite the same as the Tua-Joe Burrow Alabama-LSU matchup during last year’s college football season, but Tua showed continued growth and command of the Dolphins offense.

It was another conservative game plan for Miami head coach Brian Flores who leaned heavily on the Dolphins run game. Salvon Ahmed led Miami with 85 yards rushing on 21 carries. Miami rushed for 111 yards and the run game took some of the pressure off of the Dolphins rookie quarterback.

Tagovailoa’s statistics against the Chargers don’t jump off the page, but they were enough to get Miami its most important stat – another victory. The win moves the Dolphins to 6-3 and a half-game behind first-place Buffalo in the AFC East Division race.

Looking into the Numbers

For the game, Tagovailoa completed 15-of-25 passes for 169 yards, but he did throw two touchdown passes. Both scoring tosses came in the red zone, the first a three-yarder to Jakeem Grant in the first quarter and the second a two-yard scoring pass to TE Durham Smythe early in the fourth quarter.

While Tagovailoa’s game stats might not look all that impressive, consider some of his Next Gen stats provided by the NFL reflective of his continued growth. Tagovailoa logged the second-best average air yards per completion (8.2) for the week. He also did not throw an interception and his athleticism allowed him to avoid a sack against the Chargers.

Tagovailoa did get away with forcing a ball to TE Adam Shaheen. The ball barely squeaked through L.A. LB Kenneth Murray’s hands. On another attempt, Tagovailoa drilled a laser to TE Mike Gesicki up the seam into a window that didn’t appear to be open. The resulting deflection was nearly intercepted, but sometimes you’re good enough to create your own luck.

The Dolphins hope their rookie quarterback continues to develop as they head to Denver this weekend. The Broncos are 3-6 and are coming off back-to-back losses to Las Vegas and Atlanta.