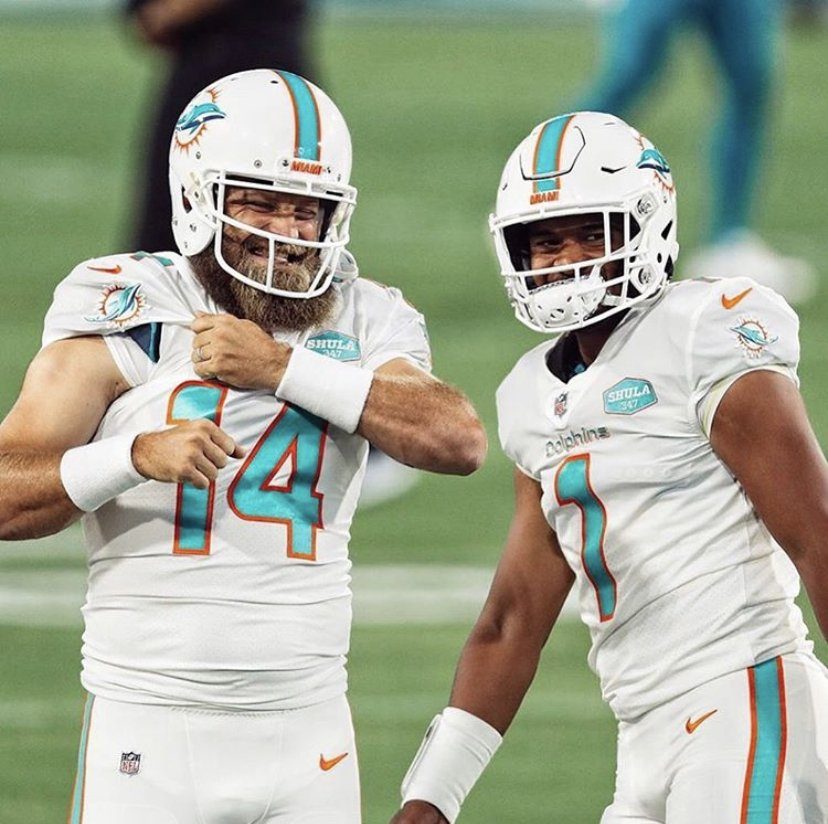 At some point, it’s going to happen. Miami first-round draft pick Tua Tagovailoa is going to line up at quarterback for the Dolphins, it’s Tua Time! We just don’t when.

Tagovailoa was selected with the fifth pick in the 2020 NFL draft with the expectation that he would be the Dolphins’ quarterback of the future. Veteran journeyman Ryan Fitzpatrick, who was signed by the team last year, would serve as Tagovailoa’s mentor and bridge the gap prior to the former Alabama star’s eventual takeover.

Fitzpatrick ended the 2019 season with 3,529 passing yards, 20 passing touchdowns, and 13 interceptions. Fitzpatrick’s passing stats also to go along with 243 rushing yards and four rushing touchdowns. Interestingly enough, he ended up being the team’s leading rusher for the 2019 season, becoming the oldest player to lead a team in rushing in NFL history. But most importantly for Tua, Fitzpatrick is a very smart player who could impart much wisdom on the young rookie quarterback.

There have been many theories on when it will be “Tua Time.” Some believe he should have taken over right away and started from Day 1. Others believe he shouldn’t start at all in 2020 similar to how Patrick Mahomes was brought along in Kansas City, and look at how that has turned out for them. Yet others lie somewhere in between.

So, when will it happen?

Remember, job No. 1 for Miami head coach Brian Flores is winning football games. With a huge win over San Francisco recently, the Dolphins are 2-3 with plenty of football to play. Consider also that Miami only lost to 4-0 Buffalo by a field goal and was extremely competitive in a 31-23 loss to 5-0 Seattle.

Miami heads into a stretch of seven games where only one of those teams – the L.A. Rams – has a winning record. For now, the experience and savvy of the grisly Fitzpatrick gives Miami the best opportunity to win.

For every Russell Wilson or Cam Newton, there is an Akili Smith or Joey Harrington. Where does Tua fit in?

That’s hard to say, but look at Tagovailoa’s rookie quarterback peers. No. 1 overall pick Joe Burrow has some impressive stats – 1,304 passing yards and just three interceptions – but he’s only thrown six touchdown passes and his Bengals are 1-3-1.

Justin Herbert was thrown into the fire in Los Angeles after Chargers starter Tyrod Taylor was injured. Like Burrow, Herbert has put up some solid numbers – 69% completion rate, 1,195 yards, 9 TDs – but his Chargers are just 1-4.

Sure, Burrow and Herbert are gaining valuable experience, but in a league where winning in paramount neither of the two could be considered a success just yet.

The reality of Tagovailoa’s situation is that he is most likely developing exactly as planned. What fans don’t see and likely don’t realize is the learning that happens each and every day.

Remember, Tagovailoa goes to practice as an NFL quarterback every day. He sits in the meeting room right beside Fitzpatrick. He watches the same film. He takes snaps – maybe not as many as Fitzpatrick – in practice.

If Miami continues to win, Flores will continue to play Fitzpatrick. If the Dolphins stumble, Flores will likely bench the veteran and play his highly touted rookie. When that will be is anyone’s guess.